1PM After a fascinating morning exploring Perseverance Harbor’s western end from the water, this afternoon I’m heading up a boardwalk to the Col Lyall saddle, shrouded in mist and increasing sleet. Zodiacs drop us on shore at the old meteorological station at Beeman Cove. A minuscule stretch of rail line connects one corner of the inlet with the other, more evidence of the island’s past habitation and industry. Huts crowd along the shoreline, guarded by a strapping sea lion bull. 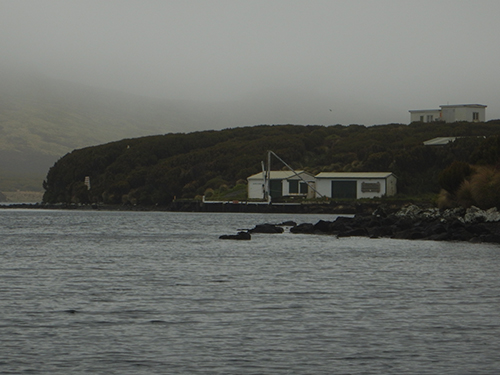 Huts at Beeman Cove, with the hills hidden in mist behind

Hiking poles ready, we wend our way to the boardwalk past abandoned huts crowded with waist-high stands of Pleurophyllum criniferum, black daisies. Between the huts is the start of a thin line of treated pine planks cloaked in chicken wire, the same arrangement as on Enderby Island.

The boardwalk starts among old huts 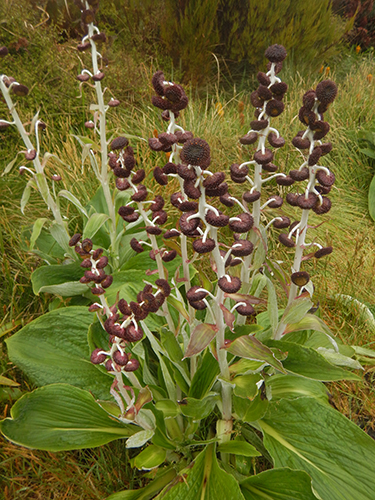 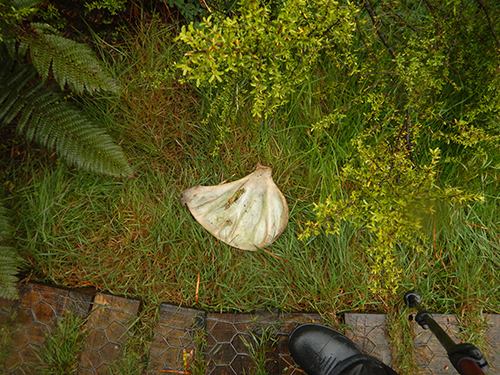 A sea lion flipper – with gumboot and trusty hiking pole

I’m happy to be at the back of the line but soon it becomes less a choice and more inevitable as the slope increases and my legs wobble – sea legs and/or MS vertigo and fatigue, all I can say is hiking poles are my best friend right now. The dracophyllum is high here, climbing overhead crusted with thick lichens. Small white flowers dot spiny needle-like leaves. The path ascending, there’s glimpses of the water below – a vista of Perseverance Harbor shrouded in fog with our ship a tiny speck in the distance.

Dracophyllum and ferns crowd the path 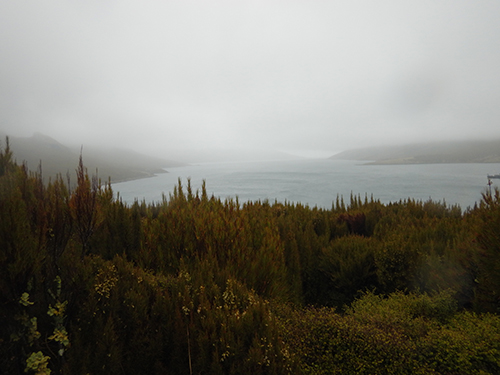 View to the harbour, with lichens at bottom left and ship at far right

The scrub opens up

The view opens up and tangled tussocks drape over the boardwalk’s thin planks. Dense, dark ferns crowd the understorey, there’s a sharp drop on one side or the other. A botanical riot of grasses, herbs and moss tumbles down steep slopes, profuse green, gold, purple foliage of every shape and texture crowding the hills. Concentrating on getting up and down the narrow walk I pause to step over broad ridged leaves of Pleurophyllum speciosum, peering into burgeoning flowerheads spiked with jutting petals. 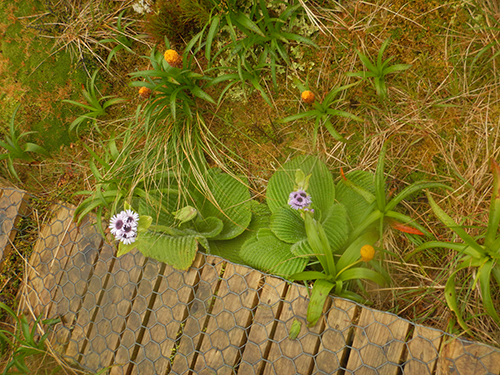 Even through the mists I can see brightly coloured swathes of flowers including the giant Anisotome, getting a sense of how brilliant this hillside will look when the air clears. The path has turned and the harbor is out of sight, now I’m surrounded by cryptic plant life capped with heavy fog, blocking out any sense of distance. 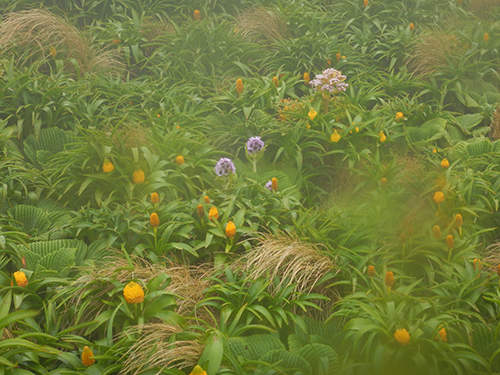 Reaching a level stretch curving around the hillside, a massive sea lion bull starts out of purple ferns to claim the boardwalk. What to do? Our expedition leader emerges from the fog and directs us up the hill across the peat. Over ground wet and spongy, negotiating wide Pleurophyllum leaves bigger than dinner plates, slippery Bulbinella criss-crossing tangled low branches we circle widely, giving the bull his turf. 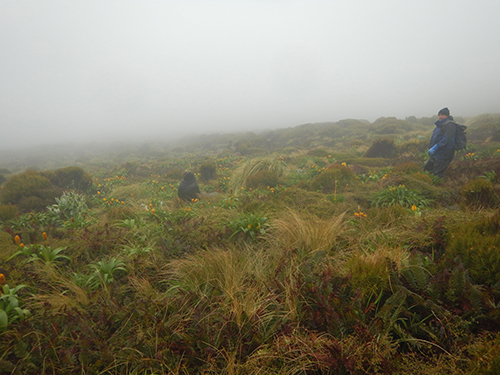 Giving way to the local bull

Ascending through sodden mist, leaning into barreling winds, we begin to see albatross nests. Sturdy mounds of soil jutting through tussocks, encroaching grass seedlings suggest these ones haven’t been used by the birds lately. Further up we should see this year’s nesters.

Cresting the next hill there they are, glowing white in thick misty air. Surprisingly close to the path and dotting the hillsides, Southern Royal albatross on nesting mounds. It’s such a contrast being so close to these majestic birds on solid ground, after watching them glide over ocean swell from the ship. Cloaked in fog andsleet, ensconced in megaherbs the albatross don’t flinch as we pass by, stopping to click our cameras and observe. Very surprising how the birds did not seem at all disturbed by this close encounter with humans. 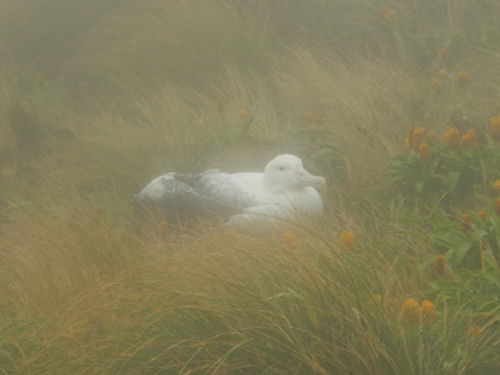 The birds did not seem to be disturbed by their close encounter with humans.

The wind is getting really fierce and the sleet horizontal as I reach the final crest before the saddle between Col and Lyall peaks. The fog is so thick visibility is down to just a few meters. Dripping with icy sleet, it’s such a great feeling to have made it this far up but the wind defeats me. I decide to head back down the boardwalk and watch the albatross.

Final crest to the saddle

Not far down the path Tui suddenly signals a halt, and points out two albatross – one on each side of the path. In a fascinating display the albatross on the lower side walks up the hill to her(?) neighbor, who is sitting on a nest and they start clacking their beaks at each other, preening and posing. Opening out their massive 3 meter wing span I get a good view of the markings that distinguish them from other albatross species. The display continues for several minutes, and it’s not until the first albatross disappears into the mist do we start walking again.

The two birds spot each other 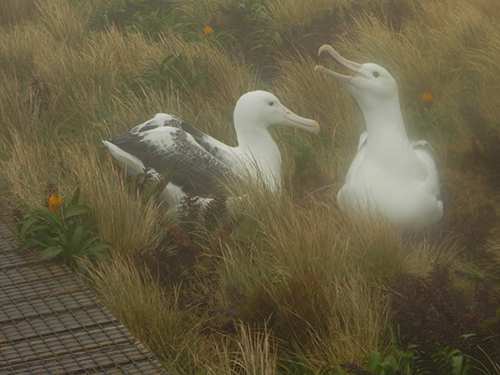 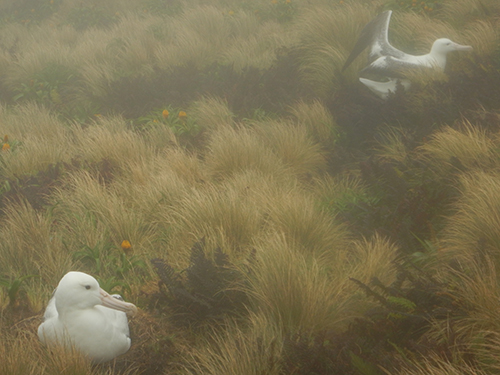 As usual, I’m at the tail-end of the group and it’s the best place to be. On the descent back to shore there’s time to examine the multitudes of plants I missed on the way up, taking in the rich diversity. Also at the rear is a botanist who’d been working on Macquarie Island, and could spot a tiny orchid dotting a moss cushion at 10 paces. As we made our way to the harbor she shared some of her extensive knowledge of Campbell Island’s flora, pointing out and identifying plant after plant including three different orchids. We even spotted a rare blue flowered Hebe (a relative of Hebe elliptica), normally found at a higher elevation. It was one of the most fascinating walks I’ve ever taken and a highlight of the trip. Campbell Island’s botany is astounding in its complexity and diversity, it could take a lifetime or more to know it all. Past seal wallows and through the dracophyllum, we finally reach the harbor as the last zodiac is casting off. 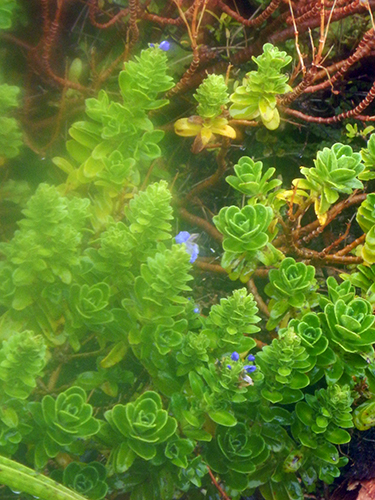 There’s a path in there somewhere 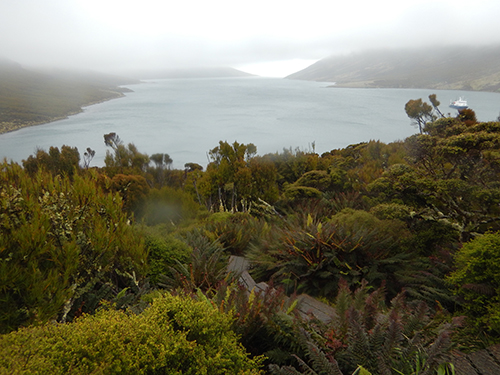 The air is clearing, by the time we’re on board patches of blue sky are showing. I’d forgotten it’s New Year’s Eve, but the galley team hadn’t and we’re treated to a massive dinner and bubbly. Nearing midnight it’s onto the top deck to sing Auld Land Syne, admiring bright stars in a clear sky. It’s so calm, the ship is barely rolling. Suddenly, green sheets of light drop through cold air, stars pinpricking silver the vertical sheen. Aurora Australis! I’ve never seen anything like it. It’s the most beautiful phenomena you could hope to see, and on New Year’s Eve of all nights. I feel truly privileged – a brilliant day to end one year, a celestial light show to welcome the next.

After coming home I read Macquarie Island station saw the aurora at the same time on New Year’s Eve. So what we saw was part of a stream of light over 700 km long, wrapping around the base of the globe. 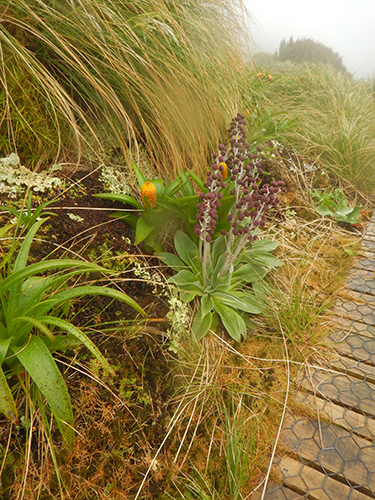