9.15AM Briefing for today’s landing at Buckles Bay and Station visit. The first thing we’re reminded of is ‘Things may change, times need to be flexible.’ After this mornings foggy zodiac cruise in Lusitania Bay the island is now invisible behind walls of mist. The afternoon landing is weather dependent.

The station’s under there somewhere

The Macquarie Island Station sits at the base of Wireless Hill on the isthmus at Buckles Bay. The first scientific base on the island was established by Mawson in 1911, further up Wireless Hill from today’s buildings. Sealers and oilers used the isthmus for landings in the early 19th century, and it’s been the hub for human activity ever since, mainly because it’s the closest thing the island has to a harbor and flat land. It’ll be another a wet landing, with large rounded boulders underfoot. Groups of 12 will go with Heritage and Macquarie Island staff, there’s no wandering around on your own at the Station. We’ll go up a boardwalk on Razorback Ridge, see penguin digesters up close then cross to Hassleborough Bay on the isthmus’s western side. This is where we might see pillow basalts and fur seals. The first of the twice daily weather balloon releases will take place at 10.15AM Macquarie Island time (Australian daylight savings time, 2 hrs behind ship time which is NZ time.) Meteorological work including upper atmosphere studies has been ongoing since the mid 20th century. Station has helicopter pads, a mess and accommodation compounds. There’s fenced off No-Go Zones around the magnetic experiments area. A colony of Gentoo penguins is resident along the edges of the base, lots of Elephant seals around. 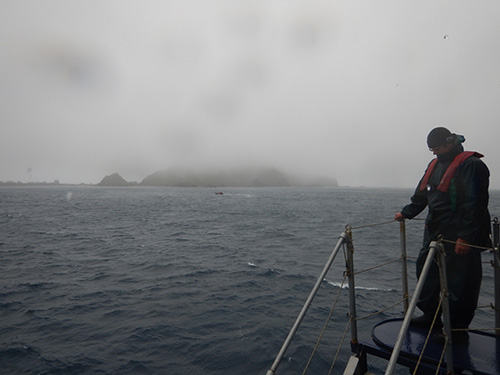 Later Landed on shore about midday, and had a guided tour of the Station. The fog still hadn’t lifted, so lamps marked the landing point. First it was up the boardwalk to Razorback Ridge, where you can look north along the isthmus to Wireless Hill and see just how narrow it is. Well, you could if the fog lifted. But even in the thick damp air the view is impressive, from the top of the boardwalk I can see a short way down both sides of the island and the hills climbing towards the plateau. Giant Petrels, Skuas and other large seabirds slice through the air on constant winds. 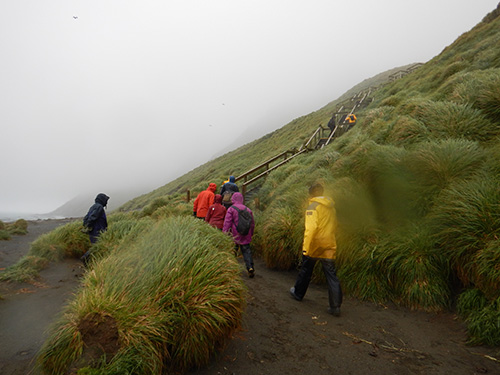 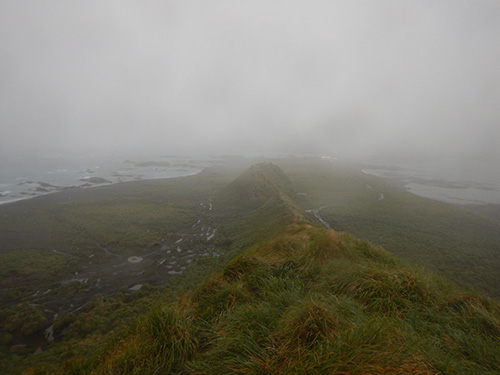 Looking north along the isthmus to the Station and Wireless Hill

Elephant seals are all over the place here, sleeping on paths, tangling on the beaches, grunting in tussocks. From the top of the boardwalk we could see dozens of seals fighting, wallowing and sleeping, then had to dodge territorial nappers on the track to the base. When you walk past them, mouths open wide and huff and puff. Can be very intimidating, except when they lapse into a yawn. 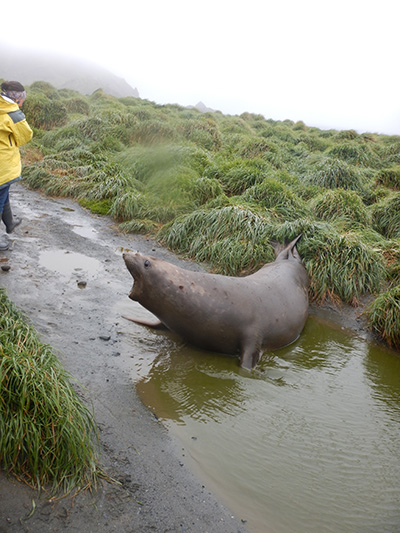 This is my track!

Stay out of the fenced areas

Historic sites and objects dot the isthmus: old bits of machinery, a giant anchor, rotted wood and a group of penguin digesters. These ones even had a bit of interpretive signage, the fist sighted on this trip, spelling out the gruesome story of ‘bird oil’ and failed ventures to harvest penguins. We troop past areas fenced off with treated pine posts, guarded by Elephant seals. 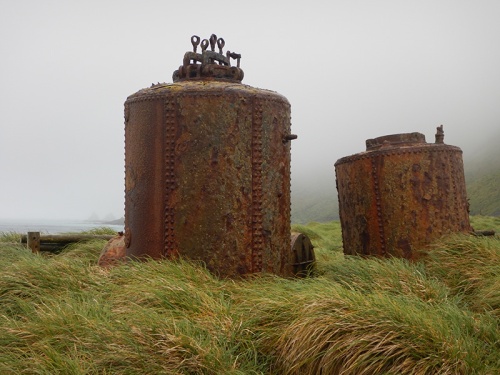 On the road into the Station we stop at two tiny huts used by hunters during the pest eradication program. Ingeniously designed to capture drinking water, stay warm and offer much needed shelter in the harsh environment, these huts were lifted by helicopter and dropped – placed – at strategic points, and used by the hunters and their dogs while they monitored for rats, rabbits and mice in some of the almost inaccessible parts of the island. 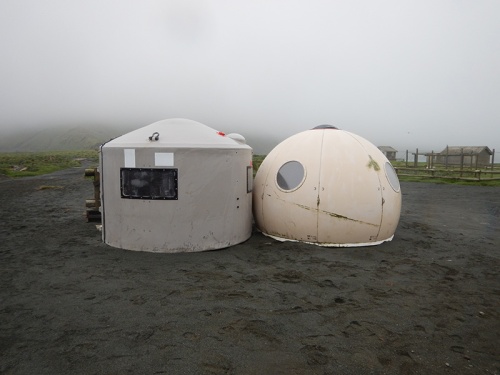 Inside a field hut

Ranger in Charge Paul Helleman gives us a guided tour

Past the Apple Hut we got a quick look inside a Nissen hut filled with artifacts collected on the island over the years – a giant try-pot for rendering blubber, bottles, tools, detritus left by sealers and scientists over decades. There were more buildings than I expected at the Station, apparently a lot are used for storage.

A try-pot for rendering blubber, and shelves of artefacts from the island’s past 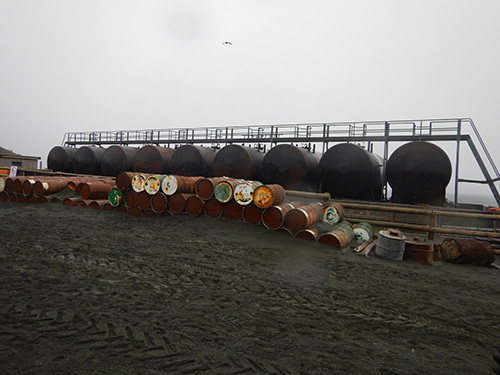 We missed the launch of the weather balloon this morning, it would have been hilarious to  see the meteorologists navigating the sprawling crèche of Gentoo penguins outside the weather hut.

It’s my first sight of the charismatic Gentoo penguin. Bright orange bills and feet, fluffy young flat out napping in the middle of what should be a busy thoroughfare, sleek black and white adults issue a resonating call.

Wildlife has right of way on this island, so we go around the back of the huts and are confronted with the massive green geodesic dome I could see from the ship. It’s huge! Our guide explains how it protects the island’s satellite dish from weather damage and other misfortune, essential given it’s the island’s only link to the outside world for most of the year. Ranks of LARCs (Lighter Amphibious Resupply Craft) line the shore, used to transfer crates of equipment, pallets of food and everything else the Station needs from ship to shore during supply visits from the Australian Antarctic Division.

Walking towards the main part of the station 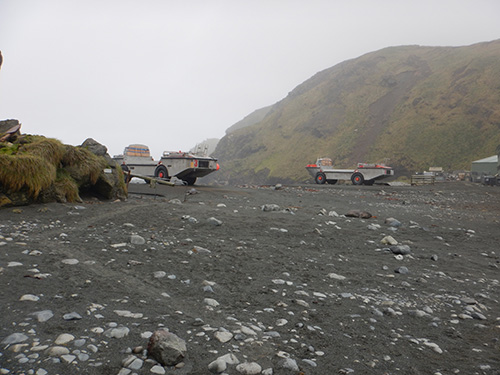 We’re treated to hot scones and tea in the Station mess, and get a fascinating glimpse into life on the island. One wall is covered in photos of the over-winter teams from the past 60-odd years, including the ‘Hero dogs of Macquarie’ that played a key role in the pest eradication program. A decade or two previously the station cats had pride of place in the photo’s front row. They would have been kept busy chasing rats and mice in the Station. Outside the mess fishing buoys washed up on the west coast have been re-purposed into Christmas decorations.

Part of the Winterer’s Wall

The heavy sky is starting to lift as we cross the isthmus to Hassleborough Bay. There’s more Gentoos on the west coast, and this year’s young are shedding their fluff to expose sleek, sea-faring plumage. It must be hard work, they look wiped. In the grassy dunes endemic Macquarie Island Blue Eyed Shag are gathering grass for nesting, their bright eyes striking against black feathers. Knots of giant kelp strew the beaches, sometimes covering unlucky Elephant seal pups. 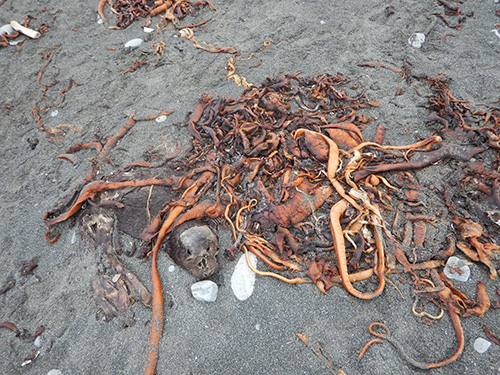 I don’t see any fur seals or pillow basalts unfortunately, but looking down the west coast I can see the flat ‘featherbed’ quaking mires. Made of layer upon layer of vegetation, our guide tells us they’re getting deeper now the rabbits have gone, another positive result for the eradication program. They got their name from early sealers who noticed  if you stand on them and jump, the surface will undulate. And possibly suck you in up to the knees. 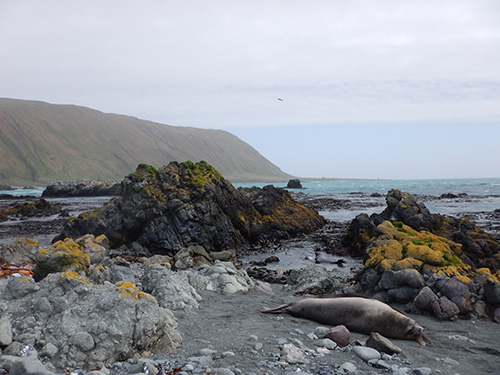 View down the west coast from Hassleborough Bay.

King penguin group. The flat area at the base of the hill in the distance contains the quaking mires

Clouds shred away just as the zodiacs pull in to take us back to the ship. Our time on Macquarie has ended as it began, in bright sunlight. Back on board I head up to the 600 level deck and watch the island recede into the haze. As we head north-east I get a view of the island as a whole, including the Judge and Clerk islets off the northern tip.

Onshore, I couldn’t get a sense of just how isolated Macquarie is. Subconsciously you assume there’s more land over the hills and horizon. But from here, the isolated and unique position of Macquarie Island is plain to see. After reading about the island for so long, I’ve had a fascinating and intriguing 2 days here and hope to some day return.

The island receding in bright sun 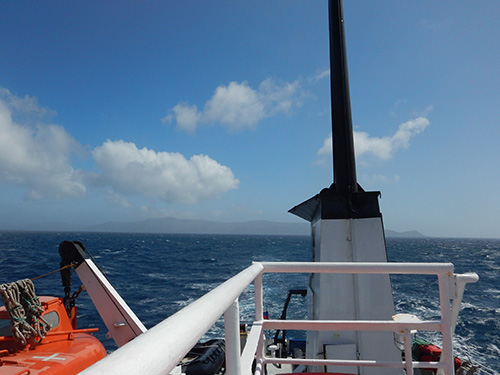 View of the whole island, before it was swallowed in the haze 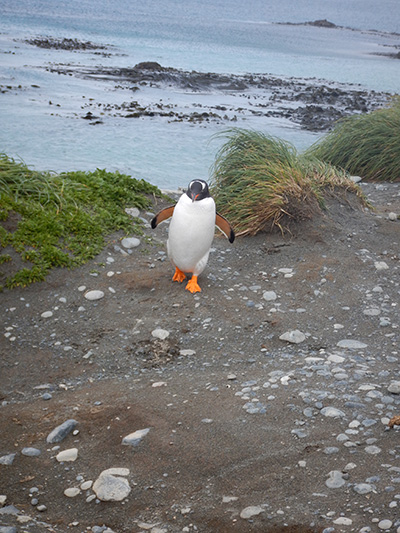 A final look at the Gentoo’s bright orange feet 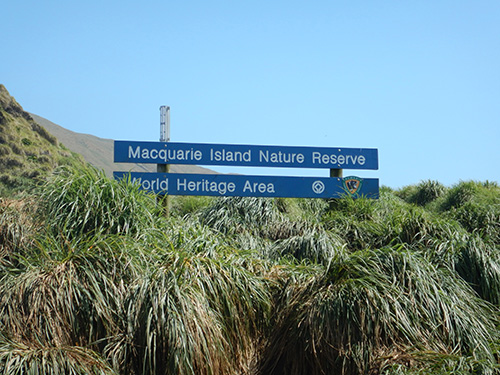