6AM Zodiac cruise this morning along Lusitania Bay past massive King penguin colonies. The island rises up sudden and steep from the ocean, covered in lush green. No tourist landings are allowed in the bay, so the only way to view the shore is by zodiac.

Landslips peel away thin soils, while the gullys catch clouds

No landings are allowed in the bay, so the best way to view the shore is by zodiac

Thousands upon thousands of King penguins packed into small coves. Katja, our zodiac driver quips ‘You’ve seen the penguin suburbs at Sandy Bay, now you’re seeing the penguin metropolis.’ Estimates of over 40,000 penguins – or is that just this year’s young? Fluffy brown chicks whistle over their parents caws, calls as distinctive as their plumage. Elephant seals crowd along the waterline in some of the colonies, big lumps of heaving snort, penguins flow around to get in and out of breaking waves. 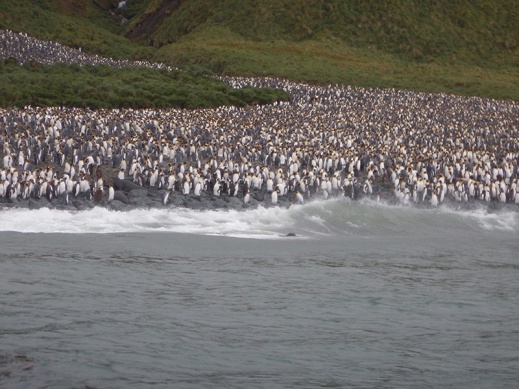 A fraction of the bay’s penguin population 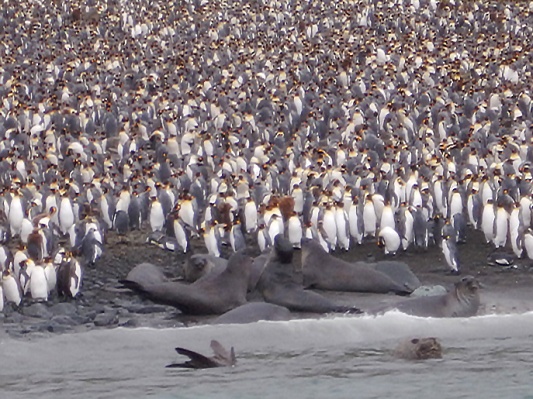 Elephant seals in the wash zone. A brown penguin chick can just be spotted near the shoreline

Low cloud skimmed with Skuas and Giant Petrels, cold blue water spotted with proposing penguins. Rusted penguin digesters, used to extract ‘bird oil’ by boiling penguins by the hundreds lean against each other with another toppled on the beach, surrounded by a thronging mass of their one-time victims. A triumph for penguins and conservation.

A morning of lowering cloud, dark bands rolling in from the south west. The island seems to capture air thick with moisture, creating its own cloud. Very different to yesterday’s bright sunlight. The penguins don’t seem to mind. 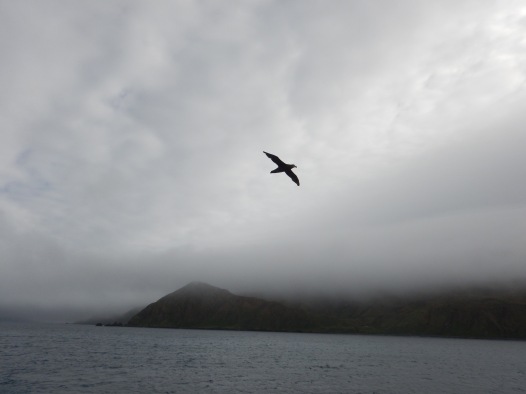 Giant Petrel swoops over the bay